Tyrannosaurus rex (name meaning "Tyrant lizard king") was a species of large carnivorous theropod dinosaur in the genus Tyrannosaurus that lived in North America during the late Cretaceous period.

Portrayal in the series[]

Measuring 45 feet (13.7 m) in length and weighing 5-6 tons, Tyrannosaurus was a very large and heavy dinosaur that could often hunt in packs of around three, rarely five individuals. However, if one pack member was mortally wounded during a hunt, the others would abandon them to their fate, meaning the hunt was too heavy for them. Tyrannosaurus were relatively fast and agile animals who were capable of catching fast-moving prey including Ornithomimus, but were also capable in tackling large and sturdy dinosaurs like Triceratops (PP: T-Rex Returns).

Female Tyrannosaurus were highly protective of their offspring and would find food for them even if it costed her her life. She would even fight off other members of her species in order to protect her young, even if she was wounded. (PP: T-Rex Returns)

Tyrannosaurus siblings were extremely hostile towards each other. When juvenile, siblings would commonly play-fight. (PP: T-Rex Returns) However, when sub-adult to adult, siblings would become extremely aggressive and would often fight. It was common for siblings to kill the other. Tyrannosaurus bites could cause infections and diseases like septicemia. (PP: The Bug House)

T. rex hated water, and wouldn't go near it, except for drink or other necessities(PP: T-Rex Returns). If 2 Tyrannosaurus rex were in a zoo and fight, you could separate them with a hose. (PP: Dinobirds)

Nigel plans to start his quest to save extinct animals with the Tyrannosaurus rex as he observes the fossilized skeleton of one at the Oxford University Museum of Natural History.

After triggering an Ornithomimus stampede, a trio of Tyrannosaurus rex were seen confronting Nigel Marven in a forest. As Nigel bolted, the T. rex followed him. Nigel narrowly escaped by climbing through a fallen branch, disabling the carnivores from following. As Nigel ventured further into the dense vegetation, the Tyrannosaurus eventually left.

The following day, Nigel entered a volcanic ash field littered with footprints. As he followed the trail, he discovered a family of Tyrannosaurus. As he and the cameraman hid behind some rocks, they observed their family behaviors, including the younger males play fighting. After a period of time, the pack left. As soon as they left, Nigel looked for eggs amongst the bones littered haphazardly around the territory. Unfortunately, all the eggs he found were empty.

When Nigel returned to the Cretaceous, he found the female Tyrannosaurus by a river. Nigel and the cameraman hid from her as she watched the corpse of a young Triceratops float down the river. As she ventured closer to the carcass, she could not reach it due to her leg injury. After realizing that trying to retrieve the carrion was a lost cause, she left the river.

Later, after causing a flock of Ornithomimus to flee in panic, the female Tyrannosaurus chased them into the location where Nigel and his team were building a giant wall to help aid them into making the female enter the time portal and into Prehistoric Park. As most of the Ornithomimus flock bolted through the time portal, one slower individual failed to outrun the crippled Tyrannosaurus and was caught. The female then left with the Ornithomimus corpse. Nigel followed.

Subsequently, the asteroid marking the K-T boundary extinction event entered the Earth's atmosphere and collided with Earth. Immediately afterwards, as the blast front approached them, Nigel quickly tempted the young Tyrannosaurus through the time portal, using himself as bait. Narrowly escaping the blast front, Nigel and the Tyrannosaurus siblings arrived at Prehistoric Park. The undernourished pair were then fed.

Later, the Tyrannosaurus pair were transported to T-Rex Hill, their new enclosure. Nigel, Bob Arthur and Suzanne McNabb visited them where Nigel named them Terrence and Matilda.

Bob Arthur and his team were trying to crane a slab of meat over the Tyrannosaurus pen in order to feed Terrence and Matilda. Whilst the food dangled in mid air, Terrence and Matilda frequently tried to reach it. When they released the meat, the pair fought over the food, with Matilda dragging it away. Later, when feeding time came and Martha the Mammoth wasn't eating, the T. rex were eating flesh again and putting on more weight.

Terrence and Matilda were beginning to get on each other's nerves and they began fighting. Bob Arthur managed to break up the fight by spraying water at the Tyrannosaurus. Whilst separate enclosures were being built, they were both kept in separate holding pens.

Terrence and Matilda were being moved into their previous enclosure but with a wall separating them. When Terrence was moved into his half, he was greeted by Matilda with a hostile lunge.

At the end of the episode, Nigel Marven, Bob Arthur and the two Ornithomimus chicks that imprinted on him visited Matilda in her enclosure. The two chicks wandered into her enclosure but were chased out by her.

Matilda broke into Terrence's half of the enclosure and challenged him for it. As Bob Arthur set up a gun in an attempt to tranquilize her, Matilda wounded and nearly killed Terrence but Nigel Marven entered the enclosure in a jeep and used himself as bait. Matilda couldn't resist a moving target and chased Nigel's jeep. As Matilda gained, Nigel stopped the jeep and climbed up a tree where Matilda then succumbed to the tranquilizer dart. Terence was sent to get healed in the end, while Matilda may have been put back into her half of the enclosure (with the gate possibly repaired).

On the operating table, Suzanne McNabb attempted to stitch up a gash of Terrence's face caused by Matilda. The next twenty four hours were critical for Terrence. Later, Suzanne visited Terrence who was being kept in a holding pen. She noticed that the gash on his face was inflamed and infected. She performed a blood test on Terrence and the results were that he had septicemia. Not knowing how it would react on a dinosaur, Suzanne injected him with antibiotics.

When Nigel came back from the Carboniferous, he and Suzanne found out that Terrence had awoken and was trashing Suzanne's surgery. Terrence was later moved back to his enclosure where he was set to make a full recovery.

During the Mass Break-Out, one of Prehistoric Park's Titanosaurs broke into Terrence's enclosure. Matilda is also known to have escaped, even though the Titanosaur was not seen breaking her side of the enclosure. Matilda made her way to Mammoth Mount where she separated the baby African elephant from everyone in its herd except for Martha. Martha intervened and defended the baby elephant from Matilda until Nigel Marven used himself as bait and made Matilda pursue him. Matilda chased Nigel past Henry and the other Nile crocodiles, as well as the Deinosuchus Dip, where the resident Deinosuchus attacked Matilda. Matlida managed to avoid it, but this bought Nigel some time. He ran to one of the holding pens and climbed the ladder, narrowly escaping Matilda. Nigel then managed to catch her by locking her in one of the holding pens. Matilda as well as the other feral park residents were returned to their enclosures.

A promotional poster of Nigel Marven, Terrence and Matilda 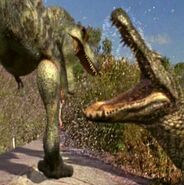 Matilda and the Deinosuchus during the Mass Break-Out

A Tyrannosaurus pack attacking a herd of Triceratops

A promotional poster of Matilda vs Terrence

Community content is available under CC-BY-SA unless otherwise noted.
Advertisement