Start a Wiki
Titanosaurs made their first appearance in the opening than in the third episode of Prehistoric Park, along with Microraptor. Despite not being anticipated arrivals, the titanosaurs turned up as one of the more major creatures in the Prehistoric Park series.

The titanosaurs are first seen walking to the forest making a lot of noise. Nigel exclaims that large dinosaurs like these aren't usually found in dense forest. This is then followed by the Microraptors feeding off of the turned-over soil that the titanosaurs make.

Later on, Nigel discovers an egg-laying site and realizes that the titanosaurs came so far into the forest to lay eggs. Shortly after Nigel captures 4 Microraptors the volcano erupts and one of the titanosaurs panic and stampedes towards a netted Microraptor. Nigel saves it but the titanosaur clipped its wing.

Nigel then sees the herd of titanosaurs going down to the erupting volcano and heads down to save them. He manages to get them through the time portal just before they died of suffocation.

When entering the 21st century they cause damage to the fences surrounding the time portal and annoys Bob. The episode ends with the titanosaurs in their enclosure (for the time being).

The titanosaurs are first seen breaking out of their enclosure and shortly after Nigel exclaims when he sees one eating from the trees.

The titanosaurs are first seen when one walks down the path to Bob who is building the Bughouse. Bob says that they can't settle at the other side of the park. He tries to feed it cycad leaves but the titanosaur retaliates by breaking a wall that is being built. It then leaves breaking a wooden plank.

They are last seen when a titanosaur pulls the jeep out of the mud and through the time portal to the 21st century. Bob gives it a stone in return.

Aside from being continually identified as titanosaurian sauropods, the exact genus of the dinosaurs was never revealed in the series. Fan speculation has put forth several identifications for the titanosaurs, namely Borealosaurus, Daxiatitan, Dongbeititan and Ruyangosaurus. Dongbeititan lived at the right time period and its fossils have been found in Liaoning Province, where Episode 3 was set. 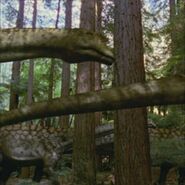 Add a photo to this gallery
Retrieved from "https://prehistoricpark.fandom.com/wiki/Titanosaur?oldid=12130"
Community content is available under CC-BY-SA unless otherwise noted.